Project description: The South Pier was built in the period from 1894 to 1904, it has been rebuilt and repaired several times over the following years. The South Pier has preserved its current form since the initial construction, but it has not seen such a thorough reconstruction for several decades. Within less than a year, as part of the reconstruction of the pier, a pile of tetrapods was created in local places, the cross-section of the pier was restored along its entire length, reinforced concrete walls were restored within the framework of the improvement works, a gravel road was created, and electrical networks and lighting were restored, as well as the reinforced concrete road structure was reconstructed. Currently, the hydraulic structure so important to the port has been restored and may it last as long as possible and protect the outer port from ice, waves and sand drifts! 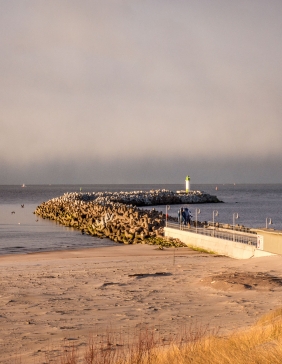