Project description: Within the framework of the contract, in the period from 2017 to 2018, a construction project was developed for the reconstruction of a multi-apartment residential building at Daugavas Street 7A, Smiltene, and author supervision was carried out during the reconstruction of the building. Within the framework of the construction project, the reconstruction of the existing building was planned, preserving the original residential function of the building with four above-ground floors and one underground floor. Considering that the building had not been inhabited for about 20 years until its reconstruction, extensive reconstruction works were planned within the framework of the construction project. A typical layout with six apartments per floor was planned for the upper floors of the building. Each floor of the stairwell has a one-room apartment, a two-room apartment, and a three-room apartment, in the basement there are auxiliary rooms of apartments, a heating unit and auxiliary rooms for the territory cleaning inventory. Well-maintained surroundings of the house, where each apartment has one parking space, as well as bike racks, a playground for children and underground waste containers are improvements that make this place organized and attractive to the eye. With the reconstruction of a multi-apartment building at Daugavas Street 7A, Smiltene, we have succeeded not only in tidying up a town's area that was waiting for transformation until recently, but also in creating new residences, which is a great pleasure! 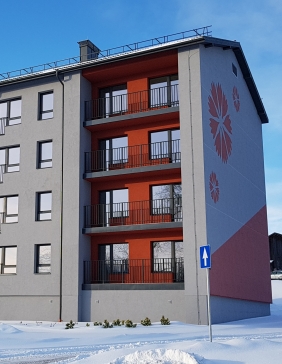