Reconstruction of the educational building at Dakteru Street 27, Smiltene

Project description: On 17 November 2021, the stage III of the construction project “Reconstruction of the educational building at Dakteru Street 27, Smiltene” was commissioned. With the commissioning of this stage, the reconstruction of the Smiltene school has been completed. Within the framework of the stage I, the school's existing three-story building built in 1973 was rebuilt. Within the framework of the stage II, a new building has been constructed that connects existing buildings. In stage III, the building built in 1937, the author of the construction project of which is Indriķis Blankenburgs, has been rebuilt. In the existing buildings, the layout of the existing rooms has been preserved as much as possible, but the newly built building is designed with an open and transparent layout. In the competition “Latvian Construction of the Year Award 2021”, this project won a Certificate of Appreciation. 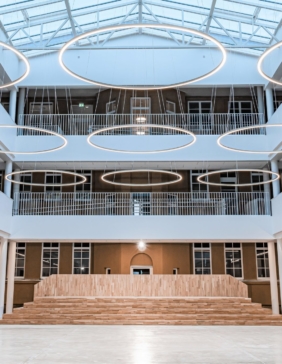