Project description: On 18 November 2014 – the day we celebrate the declaration of an independent Latvian state, a bridge over the Gauja river was opened for pedestrian traffic in Carnikava. The built bridge that connects Carnikava with the village of Siguļi is the longest pedestrian bridge in Latvia, totalling 220 m. The bridge is intended for the movement of pedestrians and cyclists, but, if necessary, it can also be used by emergency vehicles. The bridge supports are made of reinforced concrete and the span structures are made of steel. It should be noted that the construction of the bridge has solved a years-long problem, when the residents regularly used the dangerous railway bridge to cross the Gauja river to get to the other side of the river, as it was the only way to cross the river. The facility was built in accordance with the project developed by L4 ceļu projekti SIA. Within the framework of the competition “Latvian Construction of the Year Award 2014”, the facility was awarded the 2nd place in the nomination "New Engineering Structure". 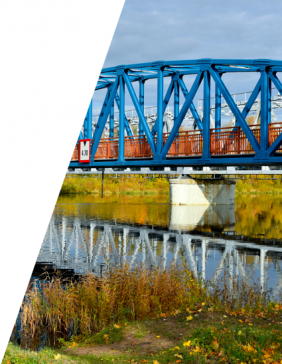